How To Get Your ATV Ready for Riding After Winter

By Austin Coker
No comments 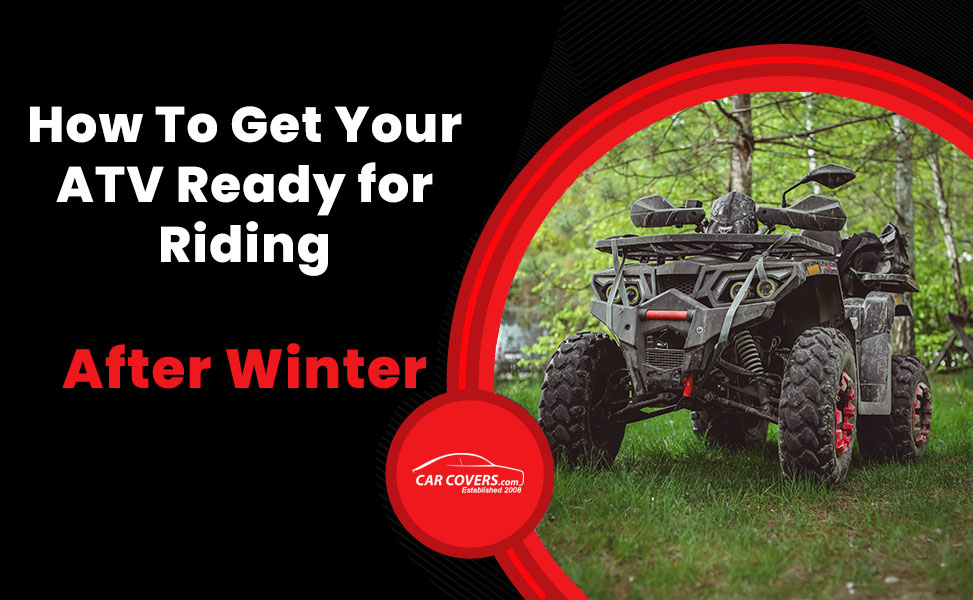 How To Get Your ATV Ready After It Sits For Winter

How To Get Your ATV Ready for Riding After Winter

If you tried starting your ATV after winter, but it just won't start, you should know that several things could be responsible for your ATV failing to start properly. If you're currently experiencing this problem, here are some tips on how to solve it and get your ATV ready for riding after winter.

Most of the time, the reason why most people have trouble getting their ATVs to start after it has been sitting for a while is that there is something wrong with some or all of the fluid systems in the ATV. Usually, this problem is caused because of improper ATV storage. You can check our guide on how to properly store an ATV for storage. When you don't store your ATV properly, there's a high chance that the fluids in it will go bad or get contaminated. If this happens, you won't be able to get it to start when you want it to after winter.

So the first thing to do if your ATV has been sitting for a while and it turns over but won't start when you try to start it is to do thorough fluid maintenance. As far as your ATV is concerned, there are three fluids you'll want to check and possibly replace. They include:

How Do I Know If My ATV's Gas Is Bad?

If you stored fuel in your ATV all through the winter and you're not quite sure if your gasoline is in good condition, you'll want to check its smell and color. This is the easiest way to know if your fuel is in good condition or not. If the fuel is bad, you'll notice it has a pretty sour smell, and it looks noticeably darker in color. In some cases, you'll also notice a change in the fuel's consistency (it'll appear thicker).

Note that usually, it takes ATV gasoline about six months for it to deteriorate. However, depending on the quality of the fuel you have in your ATV, this process could happen much faster. Even if your ATV's fuel doesn't appear to be in bad condition, it's always a good idea to change it if your ATV has been sitting for a while.

How To Carry Out ATV Fuel Maintenance

To change your ATV's fuel, follow the steps below:

Once you've done this, let the fuel drain out completely before returning the fuel valve's hose to its position. You'll also want to examine your ATV fuel hose line for clogs that may have built up during the extended storage period. If you find any clogs, clear them out.

After doing all of this, you can now pour fresh fuel into your ATV.

The engine oil is one of the most important fluids of any vehicle. This is because it contributes significantly to the proper functioning of the engine, and this also applies to ATVs. If your ATV has been sitting for a while, it's likely the engine oil will have gone bad. So you'll have to change it. To change your ATV's oil, follow the steps below:

Another reason your four-wheeler won't start after sitting throughout the winter is if the battery isn't in good condition. So the next part of your ATV you'll want to check as you're getting ready to ride is the battery. If you kept your ATV's battery hooked to a trickle charger throughout the winter, you won't have much problem getting it to work. However, if you didn't properly store your ATV's battery during winter or you left it in the ATV, you'll likely find that the battery is very weak or dead. This happens because ATV batteries tend to lose their charge when they are not used for long periods, especially when the weather is cold, as in winter.

One other important part of your ATV you'll want to inspect is the tires. It's very possible for the pressure in your ATV's tires to have reduced during its storage period. The tires could even already be totally flat. So before riding your ATV after it has been sitting all winter, you'll need to check the tires for their pressure and inflate them. You should take care not to over inflate your ATV's tires, as this could cause them to explode while you're riding. So make sure you keep the tire pressure within the acceptable range.

Aside from the above-listed tips on how to start an ATV that has been sitting all winter, there are also some other things you should do. They include the following: