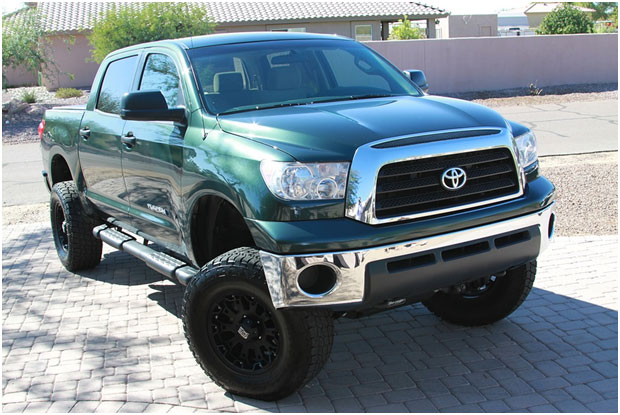 History of the Toyota Tundra

The Toyota Tundra is a pickup truck that has been in production in the United States since May 1999. Until this point, pickup trucks have been the primary domain of American automakers. The Tundra, however, is the first North American full-size pickup truck to be assembled and distributed by a Japanese manufacturer.

Introduction to the Toyota Tundra

The defining difference that separated the Tundra from the Tacoma and T100 is that the V6 was the top choice for the older generation trucks. However, it only served as the base engine for the Tundra. Later on, the Tundra would get a power boost when it was upgraded with a 4.7-liter V8. Before this point, V8s have never been used in Toyota trucks before.

Though the Tundra was beginning to create waves in the auto industry, it had a few initial hiccups along the way. The biggest road block concerned a controversy involving the name of the new truck line.  The first models weren't known as "Tundra". They were actually called T150s.

The designation would have been fine if it weren't for the fact that it sounded far too similar to the Ford F-150, the market leader at the time. As a result, Ford filed a lawsuit. Backed into a corner, Toyota had no choice but to rename their new production choice. As a result, the name "Tundra" was born.

Though marginally larger than past Toyota truck models, the Tundra was still not viewed as "real" competition to the current domestic pickup truck selection. The competition viewed it as too "car-like". In other words, it wasn't big enough to cause any serious threat to the current North American truck market.

Despite this, the Tundra still outperformed the previous T100 by double in sales. This was likely due to its production capacity of 120,000. In fact, the initial launch of the Tundra saw the highest vehicle sales in the Japanese manufacturer's history. It was at this point that it was selected as the Best Full-Size Truck by Consumer Reports. The Tundra also received the 2000 Truck of the Year award by Motor Trends. 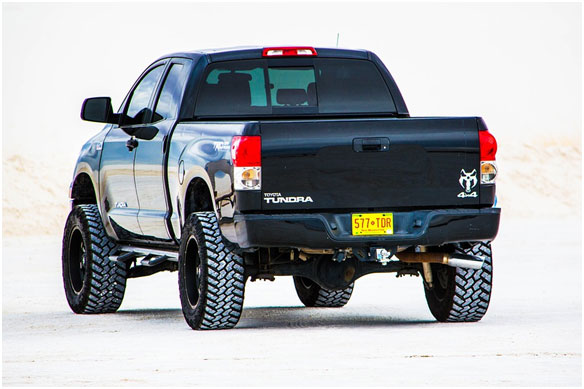 In 2002, the Tundra received a few updates (for the 2003 model). A new step side bed was now available for on Access Cab models. The Tundra also received an upgrade to its grille. Toyota didn't stop there. In 2004, they added the Tundra Double Cab, a truck that added much more space to the cab, as the name implies.

Still, with all of these upgrades, the Tundra still could not compare to what their competition had to offer, which consisted of the Big Three and Nissan. The Tundra only had a towing capacity of 6,900 lbs on its Double Cab model and 7,100 lbs on Regular Cab and Access Cab models that sported V8s.

When 2003 rolled around, Toyota timed the launch of their all-new T3 Special Edition with the launch of the Terminator 3 movie. In a sense, they used the movie as a way to indirectly promote their new launch.

The T3 Special Edition had a lot to offer: 17-inch rims, a blacked out grille and trim, limited interior trim, and a "T3" badge as the cherry on top of the cake. Regarding sales, 650 units were sold in the United States and 200 units were sold in Canada.

On February 2006, Toyota revealed its biggest, beefiest Tundra yet at the Chicago Auto Show. Its design was similar to that of the Toyota FTX along with the Toyota Tacoma. Toyota truly pushed the boundaries by making their newest truck beefier than ever. The new Tundra had an all-new 6-speed automatic transmission that paired well with its three engine choices:

The new Tundra had a payload capacity of 2,000 lbs and a towing capacity up to 10,000 lbs. This newest truck was a significant upgrade over all previous models, to say the very least. During its launch in January 2007, the configurations offered to the consumer were truly monstrous. In total there were 31 configurations that were made up of 2 transmissions, 3 cab configurations, 3 wheelbases, and 3-bed lengths.

Toyota wanted to make it loud and clear that they were muscling into the territory of the bigger truck manufacturers. Thus, they also included a deck rail system, extra large door handles, and head restraints; all features that accommodated construction workers perfectly, even while wearing a hard hat.

Though the new Tundra had much to offer to the working man, the Chevrolet Silverado Work Truck (amongst similar trucks offered by various manufacturers) were still a cheaper option.

The 2008 Tundra model offered an additional 13 variations. At that point, the total number of model variants was 44. The 2008 model also offered all-new "Tundra Grade" trim which fits below the SR5 trim.

In 2009, all Tundra's equipped with the 5.7-liter V8 (in select regions) now came standard with E85 fuel capability. Furthermore, Toyota added a new package (the TRD Rock Warrior package). They also updated their TRD Sports package. The price of the 2009 Tundra increased thus making them more expensive than the 2008 lineup, but only marginally.

2010 also saw the addition of the all-new 4.6-liter V8 and a 6-speed automatic. The final update to 2010 models was the addition of knee airbags, which received five stars by the NHTSA frontal crash test.

2009 was the first year that the all-new Rock Warrior Package was introduced to the public. This new package was themed for off-road driving. The package only offered 4x4 Tundras with either the CrewMax Cab or Double Cab variants. This package had much to offer. It came with LT285/70R-17 BF Goodrich All-Terrain T/A tires, 17" TRD forged aluminum wheels, Bilstein shocks, pedal covers and matching grille and front bumper.

When it comes to the color scheme, the Rock Warrior Package is only offered in Super White and Black. As 2011 rolled around, more changes were introduced. These included TRD Rock Warrior graphics and manual sliding rear windows.

The 2014 Tundra made a showing on February 7, 2013, at the Chicago Auto Show with an all-new design. New features included a new tailgate design, enhanced front and rear fenders, a larger grille, and redesigned tail lights. There were also upgrades to the interior. These included a backup camera, Bluetooth functionality,  a 3.5-inch screen that displays information about the vehicle, updated ergonomics, updated gauges, new seats, updated controls, an all-new dashboard and improved materials.

The body was stripped of all sheet metal except for the doors and the cab. Furthermore, the tailgate was outfitted with a spoiler, and the hood was raised to change the look of the vehicle.

The improvements didn't stop there. The feel of the steering was improved because the steering rack was re-valved. Furthermore, the 2014 Tundra provided a smoother ride than older models due to a retuned suspension.

In 2015, the 4.0 L V6 was discontinued, but it was the same year that the TRD PRO model was introduced to the market. The TRD PRO was said to be the superior choice for the off-road enthusiasts.

The IIHS picked the Toyota Tundra for the Top Safety Pick award due to its superior safety features. It even beat out the newly redesigned 2009 Ford F-150. Tests revealed how truly safe the Tundra was.

It received the maximum score for rear crash protection, the highest score for in the side impact crash test, and a good score for frontal offset crash test. Overall, the Tundra still beat out all other competitors with its safety ratings.

Toyota's manufacturing facility in Princeton, Indiana has the capability of producing 130,000 units a year, flooding the market with so many trucks that after being in business for over a decade, they have captured 17% of the full-size half-ton market.

Toyota's second manufacturing facility located in San Antonio Texas added to the overall capacity of units that Toyota could produce in a year. Taking both of its US-based plants into consideration, Toyota estimated that they would be able to move over 200,000 Tundras in 2007. Unfortunately, the company missed the mark and were incapable of hitting their 2007 sales figures. They were outcompeted by all of their competition, being outsold by Chevrolet, GMC, and Ford.

In total, most Tundra sales are generated by the 5.7 L variants of the vehicle (around 70 to 80%). Though the standard cab isn't selling as well as Toyota would like, the Crew Max is selling very well.