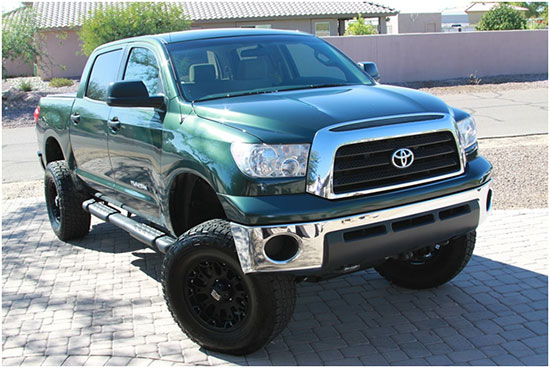 1) What is the Toyota Tundra?

The Toyota Tundra is the second truck created for the American market by the Toyota Motor Corporation.  Originally, the Toyota Tundra was called the "T-150," and it was introduced in its most current form during multiple motor shows from 1998 to 1999. The name was eventually changed because Ford Motor Corporation thought the name "T-150" could be confused with "F-150." Every Tundra shares the same wheelbase and frame.

3) Is the Toyota Tundra an import, or is it an American truck?

The Toyota Tundra is largely manufactured in a factory located in Princeton, Indiana. However, the engine and a few smaller parts are assembled in Japan before being shipped to the United States.

4) Are there restrictions when purchasing a Tundra online?

Most states will allow you to purchase a Tundra over the internet. However, if you live in Iowa, Maryland, Arkansas, Kansas, Oklahoma, Utah, Texas, Wisconsin, Virginia, Nevada, Mississippi, or Montana you will not be permitted to purchase any sort of vehicle online. Keep in mind that Mississippi, Maryland, Iowa, and Virginia will allow residents to lease a vehicle online.

5) What information should you know when buying a Tundra?

Buying any vehicle can be different for each person depending on their preferences. In terms of where you can buy a Toyota Tundra, you can visit your local Toyota dealership, or you can go online and conduct your business there. Some packages may not be available in every region, so do your research. On a final note, prices quoted online may not be the prices that are currently available in your region, so be  aware of this fact before making a final purchasing decision.

6) What solutions are there for bug and paint protection?

There are three aftermarket solutions for your Tundra when it comes to bug and paint protection. One solution involves mounting a standard bug deflector to the hood of the vehicle using double sided bolts or tape.

The second solution involves ScotchCal, a plastic polymer that can be cut to match the various outlines of vehicle parts.

The third solution uses TrimBrite Body Guard, essentially a clone of ScotchCal which works in a similar manner.

The fourth solution is to buy a Toyota Tundra truck cover. This will keep your Tundra protected from the elements even when your truck is being stored. When you cover your Tundra, it will look just like it did when you drove your truck out of the Toyota showroom formany years to come.

7) What's the difference between Base, SR5, and Limited?

Base - the base Tundra typically comes with a manual transmission, a V6 engine, and basic options such as air conditioning. SR5 - this option is seen as the most flexible version of the Tundra allowing you to add as many (or as little) options as you want. Typically, SR5's are 4x2 Access Cab Shortbeds, 4x4 single cab long bed, or 4x4 Access abShortbeds and come equipped with V8 engines. Limited - considered to be  top of the line, most Limited Tundras have leather bucket seats, V8 engines, and 4x2 or 4x4 suspensions.

8) What type of suspension does the Tundra use?

When it comes to suspension, the Tundra relies upon two separate methods. The first relies upon a spacer that measures 1.5 and 2 inches in diameter. These spacers fit between the shock/oil combination and the suspension arm.

The second method involves replacing the major suspension components (likely with a lift kit). You can do this yourself or have professionals do it for you.

9) What should you know when changing the headlight/fog lamp bulbs on your Toyota Tundra?

The Tundra typically comes set up with headlights that use a 55 Watt H4 Halogen Bulb. You can replace the stock H4 bulb with another H4 bulb from the manufacturer. As a warning, be careful of exceeding the specified wattage of the stock bulb, or you may end up short circuiting the headlight assembly.

Each Tundra owner will likely argue for one choice over the other due to preference. However, knowing the pros and cons of spray in bed liners vs. drop-in bed liners will greatly influence your purchasing decision.

12) How do I address the oil dipstick issue?

Some Tundra owners have reported that the oil dipstick has a minor burr that prevents it from properly seating in the dipstick tube. To remedy this issue, file off the bur.

TRD is a separate "arm" of Toyota and stands for Toyota Racing Development. TRD works in concert with Toyota Motorsports and produces and distributes parts that can be added on to your Toyota that increases handling, aesthetics, performance and more.

14) Does the Tundra allow for horn upgrades?

In short, yes the Tundra does allow for horn upgrades. Many owners of the 2000 Tundra complained that their horn lacked any "authority." As a result, many 2000 Tundra owners replaced their horns with an aftermarket horn that packed a much more powerful kick. Horns are relatively inexpensive and range in terms of note and pitch. You can purchase a horn at your local AutoZone, Pep Boys, Kragen, or other automotive stores.