The Ferrari Car Cover Made Out of Cardboard


When most people shop for car covers, they’re looking for heavy duty ones made from waterproof fabric or plastic. But Benedetto Bufalino, a French artist, decided he wanted something a little different. His idea? To create a car cover completely out of cardboard! Why did he do this? He hasn’t really said, but his creation was made to resemble one of the brand new Ferraris that are usually priced at around $200,000. It’s possible he just wanted to drive one of these awesome vehicles but couldn’t afford it.

What did he use?

Bufalino didn’t spend a lot on his cardboard car cover. All he really used was a lot of cardboard boxes, some tape, and some paint. He created a red Ferrari for his car cover, but one could create any sort of interesting vehicle—it doesn’t even have to be based on an actual car. It’s a way of being very creative and doing something a little different to your vehicle. He built a cardboard spoiler, left spaces for windows, and even did some detailing on the sides and the hood to give the car the appearance of a real Ferrari.

This is the biggest question people have. Can it be legal to put this cardboard cover on a car and then drive it around to give the illusion that you’re driving a Ferrari? Most people say no. The problem is that Bufalino’s design covers the brake lights, turn signals, and most of the front headlights. This is obviously a safety concern, and even though Bufalino did take the car cover for a test drive in his hometown, chances are he’s not going to be driving many places without attracting some attention from the police.

Use as a Car Cover

Another thing to consider with this cardboard car cover is how practical it is. Most car covers are used because they protect the vehicle from dust, dirt, and the weather. A cardboard cover isn’t going to do much good at all in the rain. It might help with some dirt and dust, but the fact that it doesn’t come down all the way over the car means part of the vehicle will be exposed. It also doesn’t fit around the bottom of the vehicle, so a good, strong wind may blow it right off. This is more of a vanity cover than one that could be useful in any way. 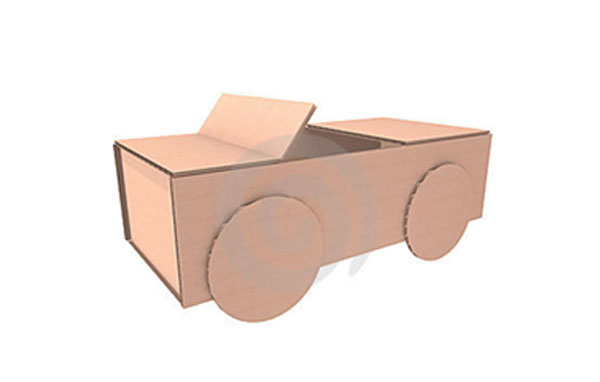 Bufalino has uploaded a video of himself driving his car covered with the cardboard Ferrari. The comments are especially interesting to read since they debate the safety of the cardboard car cover and if such car covers could ever be legal. Would they be widely purchased to disguise old cars as amazing sports cars? Or would they look really tacky and not sell very well at all? No matter what you think, you have to agree that it’s a pretty fun idea and that it’s a little different .