Rusty Wheels for Dummies: How to Stop Rust on a Car

By Ryan Wegman
No comments
More from this author

Rusty Wheels for Dummies: How to Stop Rust on a Car 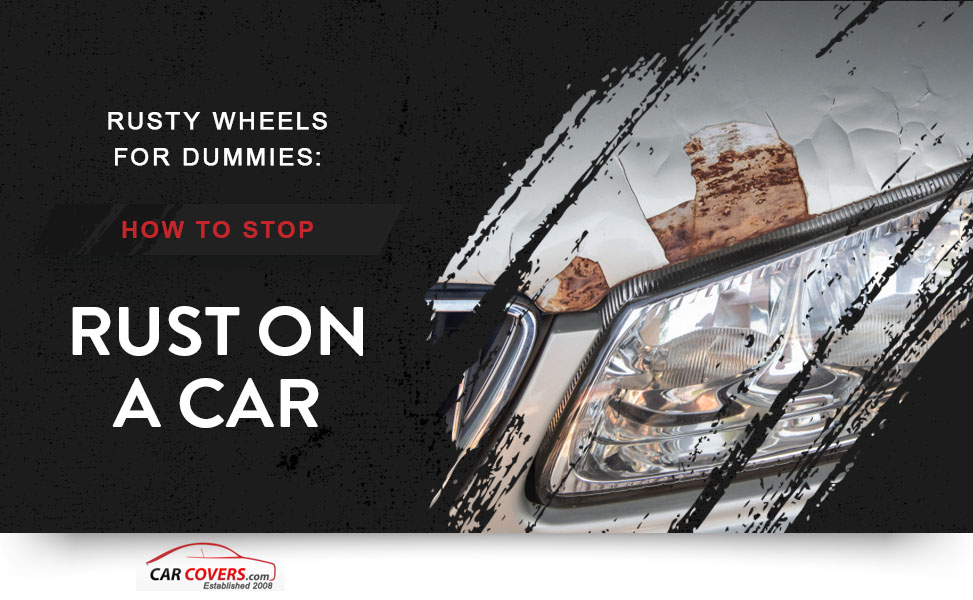 Rust on a car is a serious problem. Starting as a small bubble under your vehicle’s exterior paint, rust can progress and develop into irreversible issues, leading to premature scrappage. Despite the advanced chemical processing that goes into modern paints, no material is entirely resistant to rusting. One of the most frustrating aspects of rust damage is that it’s often too late by the time you notice it. While a rusty wheel or car door can be spotted easily, undercarriage or engine rust is much more difficult to find. What’s more, a rusted chassis or engine is dangerous and can contribute to very costly repairs. Although no car is immune to rust, it doesn’t mean that rust is inevitable. Understanding why your car is rusting and its causes can help you prevent unnecessary corrosive damage to your vehicle. Preserve one of your most valuable assets by learning how to stop rust on a car.

Why Do Cars Rust?

Rust develops by the electrochemical breakdown of iron-based metals. This process is called oxidation. The iron molecules react with oxygen to create a new molecule called iron oxide. Iron oxide is commonly known as rust. Different types of steel rust at different rates. The rate of rusting depends on several factors, including the environment, thickness of steel, alloy components, and the heat treatment it receives. In general, older cars were more poorly made than modern ones, with lower quality materials, making them more susceptible to rusting. In addition to the regular rate of rust, several other environmental factors can accelerate the rate of rusting. It’s vital to be aware of these aspects to stop rust from damaging a vehicle.

While natural rusting is often unavoidable, it’s important to be aware of what causes rust on cars. An awareness of these factors can help you to avoid unnecessary damage.

The climate and weather have a tremendous impact on the rate of rusting. Car owners living in certain parts of the world are likely to have much higher annual car repair and maintenance bills.

One of the leading contributors to accelerated car rust is salt. Living near the ocean may have its benefits but having a favorable climate for your car isn’t one of them. Ocean salt present in the air may become deposited on nuts and bolts in your engine or on your wheels, brake calipers, and other metal components. 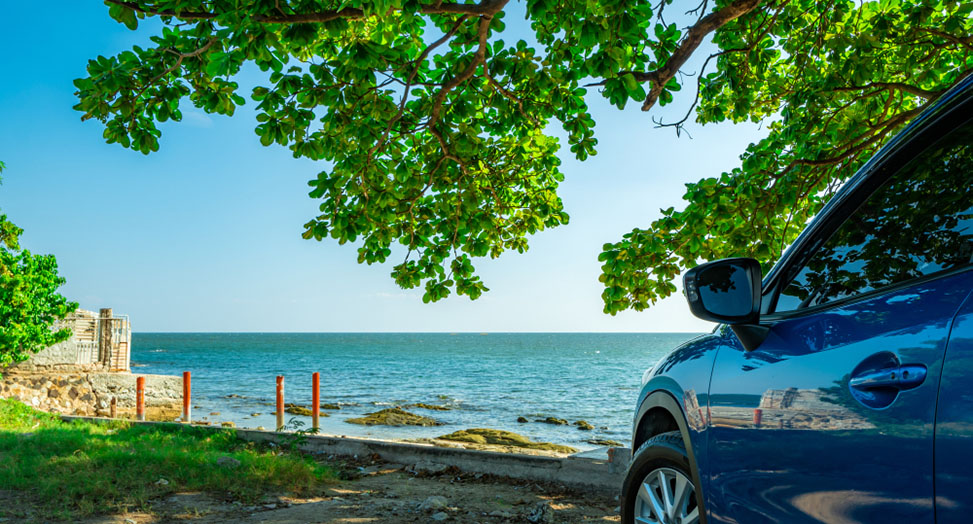 Once this salt is exposed to oxygen, it acts as an oxidation catalyst and, over time, iron oxide develops, causing rust to spread. Similar to ocean salt, road salt can corrode and cause rust to metal components. If roads in your area are sanded with salt added during snowy and icy weather, be wary that rust may develop.

Rain, hail, and snow also accelerate vehicle rust significantly. No matter where you live, these weather elements are likely to be part of the climate. Extended exposure to moisture can cause water to gather on engine components or vehicle exteriors. If this moisture isn’t removed, it can cause rust. Sunshine is something that’s often overlooked as a contributor to car rust. While it doesn’t rust cars directly, sun exposure can cause cracks and bubbles in car paint. This exposes the metal to rain, snow, or moisture, leading to rust.

As time passes, your vehicle experiences natural wear and tear. Protective coatings and paintwork can become worn due to weather, the climate, or an accident, making a vehicle more susceptible to rust. Once moisture deposits on metal components, rust may begin to develop. Age also has an impact, in terms of when the vehicle was made. Due to improvements in chemical manufacturing, modern vehicles are made with metal sheets covered in protective coatings that increase resistance against rust. Older vehicles were typically built with non-reactive coating, making them less rust-resistant.

How someone drives can also impact the rate of rusting, particularly to the wheels and chassis. If you regularly drive through mud trails, puddles, sand, or off-road, it can cause salt, silt, sand, and other debris to build up on your car. This can induce corrosion and rust if the car isn’t properly cleaned regularly.

There are three main types of rust to be aware of when protecting your vehicle: 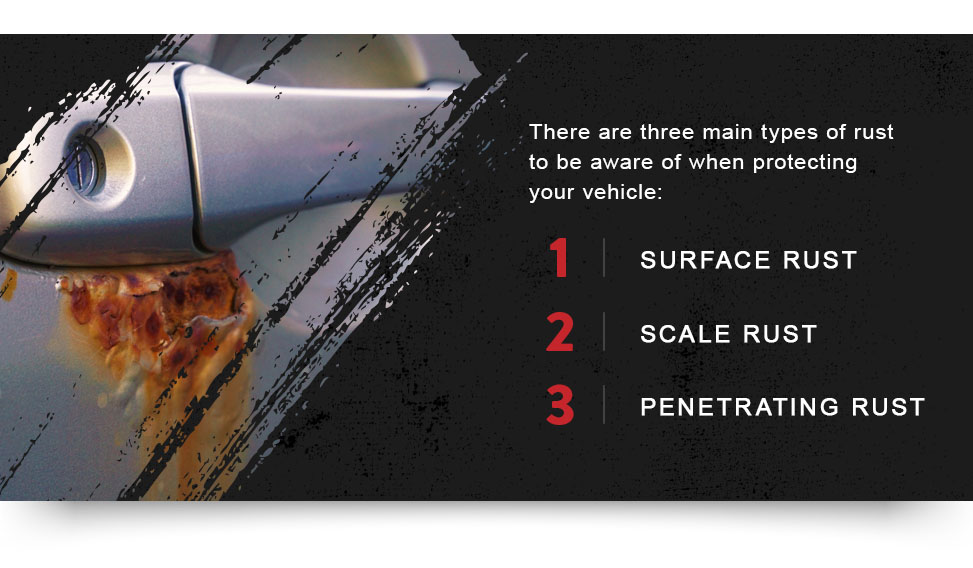 Where to Find Rust on Your Car

To diminish the effects of rust on your car, it’s important to know the telltale signs and where to look. Vulnerable areas may be out of sight, meaning the first sign of rust damage could be engine troubles. By knowing where vehicle rust frequently develops, you can conduct regular checks to minimize its impact. In many cases, surface rust is just the tip of the iceberg. If you’re unable to determine the extent of a rust patch or a paint bubble, have it checked by a mechanic. Here are some other areas to check regularly:

How to Stop Rust on a Car

Being aware of the causes of rust and the areas it is likely to develop is important. However, without preventative action, your vehicle is vulnerable to rust damage. The following steps can help make your car more rust-resistant in the long run. 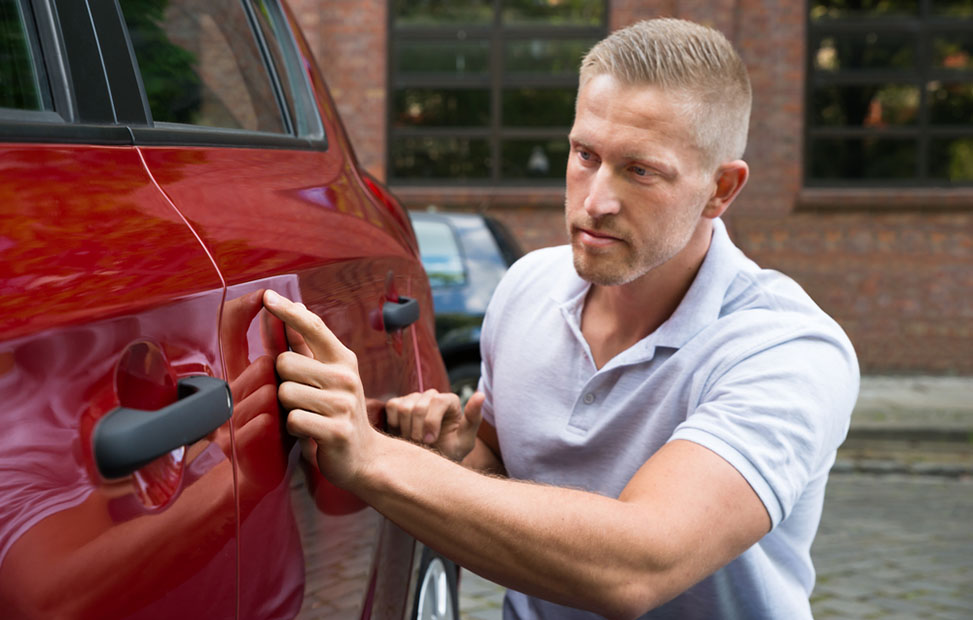 Use a Car Cover

High-quality, fitted car covers act as excellent protective layers for cars when they’re not in use. A car cover has multiple benefits. Not only does it prevent scratches, dents, and dings from passers-by and loose debris, but it also deters burglars from breaking into your vehicle. It covers the exterior and windows, allowing the car to blend seamlessly into its surroundings, making it particularly useful for expensive cars. Out of sight is out of mind.

Most importantly, a car cover helps prevent rust damage. It shields the vehicle from natural elements, whether it is rain, sunshine, frost, or wind. It is also useful for those living near the sand or the ocean, as it blocks most salt and sand particles from gathering and oxidizing on a vehicle. There are car covers available for specific weather conditions, but there are also all-weather covers for year-round protection. The most important thing is to get one that fits snugly around your vehicle. A custom car cover ensures that it will stay in place, giving your car maximum protection.

Depending on local environmental factors and your driving habits, the regularity of washing and waxing requirements can vary. In general, once per month is a good guideline. However, if you live somewhere with a humid or extremely cold climate, it’s best to wash and wax twice per month. While you don’t have to spend a fortune on the best car wash soap and wax available, it’s important to use products that are intended for vehicles. Household soap is not rust-resistant, and it can strip off protective layers, contributing to rust development. 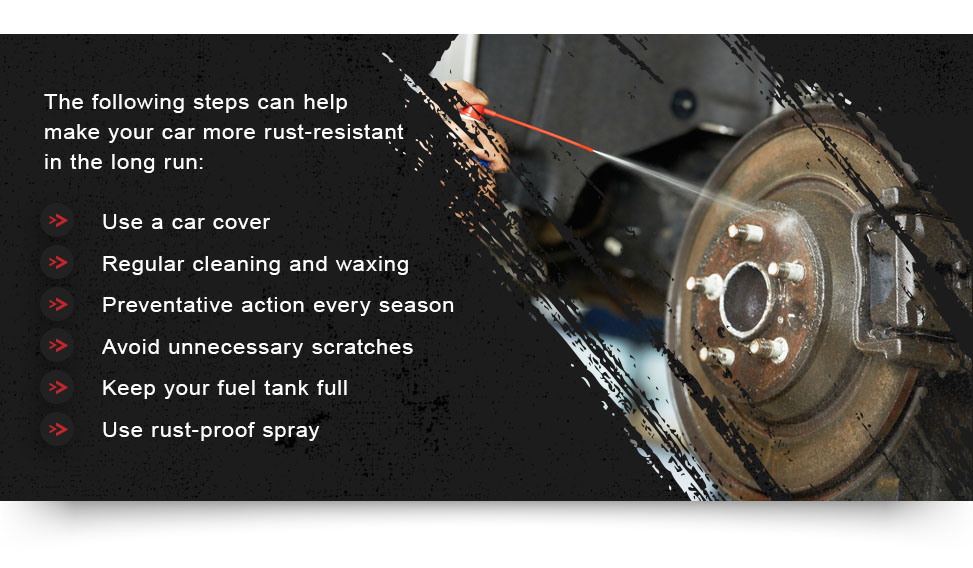 When the seasons or, more specifically, when the weather changes, car owners should put specific preventative measures in place to minimize the risk of rust damage. During sunny, hot, and humid weather, ensure you keep your car in the shade where possible. Don’t forget to fit your car cover when it’s not in use.

When it’s snowy or icy, keep your driveway clear and wash away any excess ice and snow from your vehicle. This prevents moisture and salt from seeping into the engine and chassis. Parking in a garage or shaded area is recommended. In extreme temperatures, it can be useful to get a professional car wash and wax occasionally.

Protect Your Vehicle’s Exterior with a Car Cover

While nobody wants their car to be unnecessarily damaged, slight scratches aren’t always bothersome for some people. However, these can develop and expose the metal panels beneath a vehicle’s paint, making it prone to rusting.

Avoid squeezing into tight parking spaces in case the driver next to you hits your car with their door. Be careful when taking things in and out of your car, particularly heavy items, as they can easily cause damage. Be vigilant of bird droppings. They contain corrosive uric acid that can peel away the paint, leading to rust. 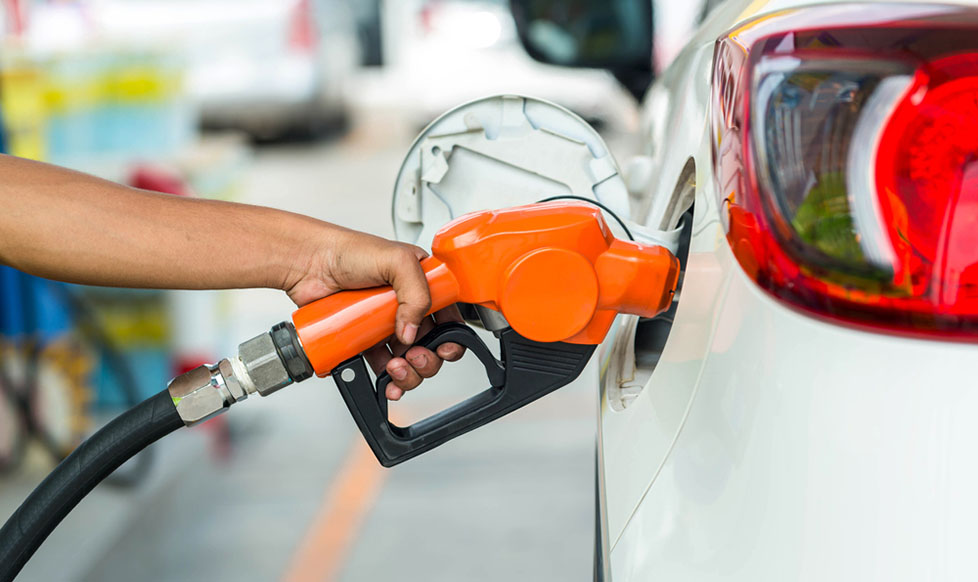 Avoid Leaving Low Amounts of Fuel in Your Tank

Leaving low amounts of fuel in your gas tank can be problematic for several reasons. Metallic tanks can rust if moisture gathers in large empty spaces. This can be sucked into the engine, creating issues with the fuel pump and lines. If undetected, this could be catastrophic for the engine. This is a particular problem for cars kept in long-term storage. Always fill your gas tank if you plan on storing your car for more than a month. Keeping your fuel tank relatively full lowers the amount of space in the tank for moisture to build, reducing the risk of rusting.

Rust-proof spray can give your vehicle an added layer of protection against rust. It can be applied to metal surfaces, engine components, and even electrical connections. There are different types of rust-proof sprays, with some being suitable to treat existing rust. It’s beneficial to get one that sprays on clear to avoid staining.

Can You Repair Rust Damage on a Car?

Car manufacturers are working to find ways of reducing and preventing corrosion and rust. They constantly test and develop materials and car exterior coatings to stop components from being damaged easily from rust. A new trend is that car parts are being made from aluminum and magnesium, as they erode at slower rates. However, these metals are very expensive, so they can’t be used on a large scale in vehicle manufacturing.

Alternative and more affordable materials such as nickel and chrome are effective in preventing rust. Steel now comes with coatings that are created specifically to make the materials more durable. However, no materials are entirely rust-proof. Preventative measures are essential no matter what your car is made from. If your car experiences rust damage, it is possible to repair it. Unfortunately, the process is tedious and can take a long time, especially if you do it yourself. For professional rust removal work, it can get quite expensive. Performing rust removal yourself involves the following steps: 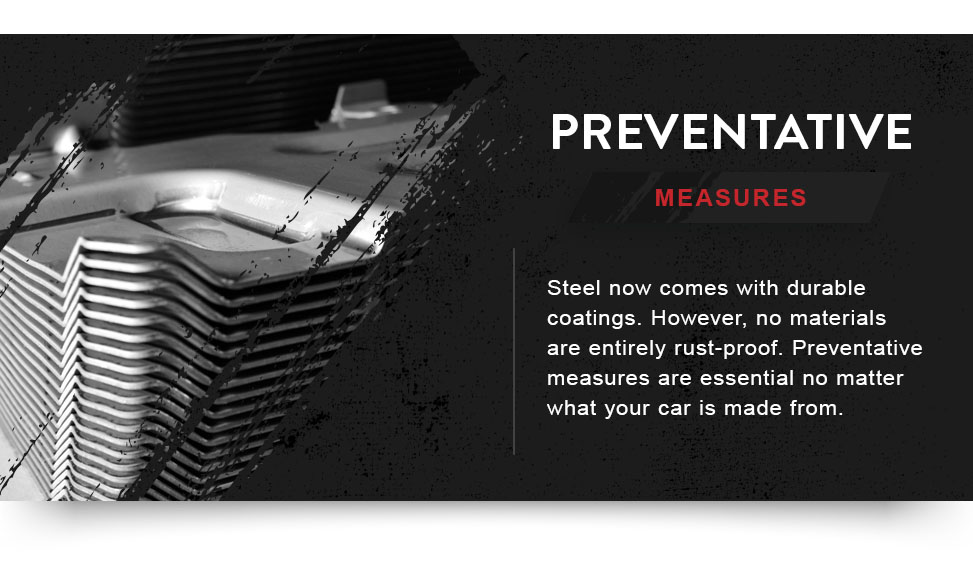 Cars are expensive, and there’s no way to avoid repair and maintenance costs. Budgeting for regular maintenance can go a long way toward extending the life and value of a vehicle. Although some problems can’t be avoided, preventative measures and careful maintenance can prevent common car issues such as rust.

To stop rust from causing major damage to your vehicle, be aware of when your car is most vulnerable and take action to reduce the risk. Always remember to adjust your approach when the seasons change. At CarCovers.com, we carry a full range of custom and semi-custom car covers to protect your vehicle against the elements. Use our convenient online search tool to find a cover to fit your car’s make and model for the ultimate in rust prevention.